I’ve taken a break from social media over the NFL offseason, but now that football is back, I wanted to catch everyone up on what I’ve been up to.

Since my last game with the Patriots, I decided to dive in and really get back into school, and to fulfill a promise that I made to my parents to finishing my college degree. I left Oregon State in 2003 when I was a junior, midway through the year. I was actually on course to graduate the following winter, which would have been a little early. But the NFL had me projected as a first-round talent going into the draft, and the chance to make that dream a reality was one I couldn’t pass up. The bowl game we played in my junior year was in my hometown of Las Vegas, too, which seemed like the right sendoff.

My parents didn’t have a chance to get college degrees, but they were really sticklers on education. There would be instances where my dad wouldn’t let me go to football practice if I didn’t have homework done, and those kinds of things stuck out in my head.

When I decided that I would give the NFL a shot, I didn’t know that 12 years would pass, or that I would have a long, successful career. But I wanted to take advantage of the opportunity and I promised that I would always go back. I don’t think you ever get too old to learn.

At the same time, when you leave school at the age of 20 and go back when you’re 33, you’ve grown and matured as a person, and the things that interest you now might not have been the same as they were back then. I wonder if I would even have really used my undergrad the way I wanted to if I’d gone right into the workforce.

Now, I know who I am. I know where I want to be this next decade or so in life, and I can really hone in on that. 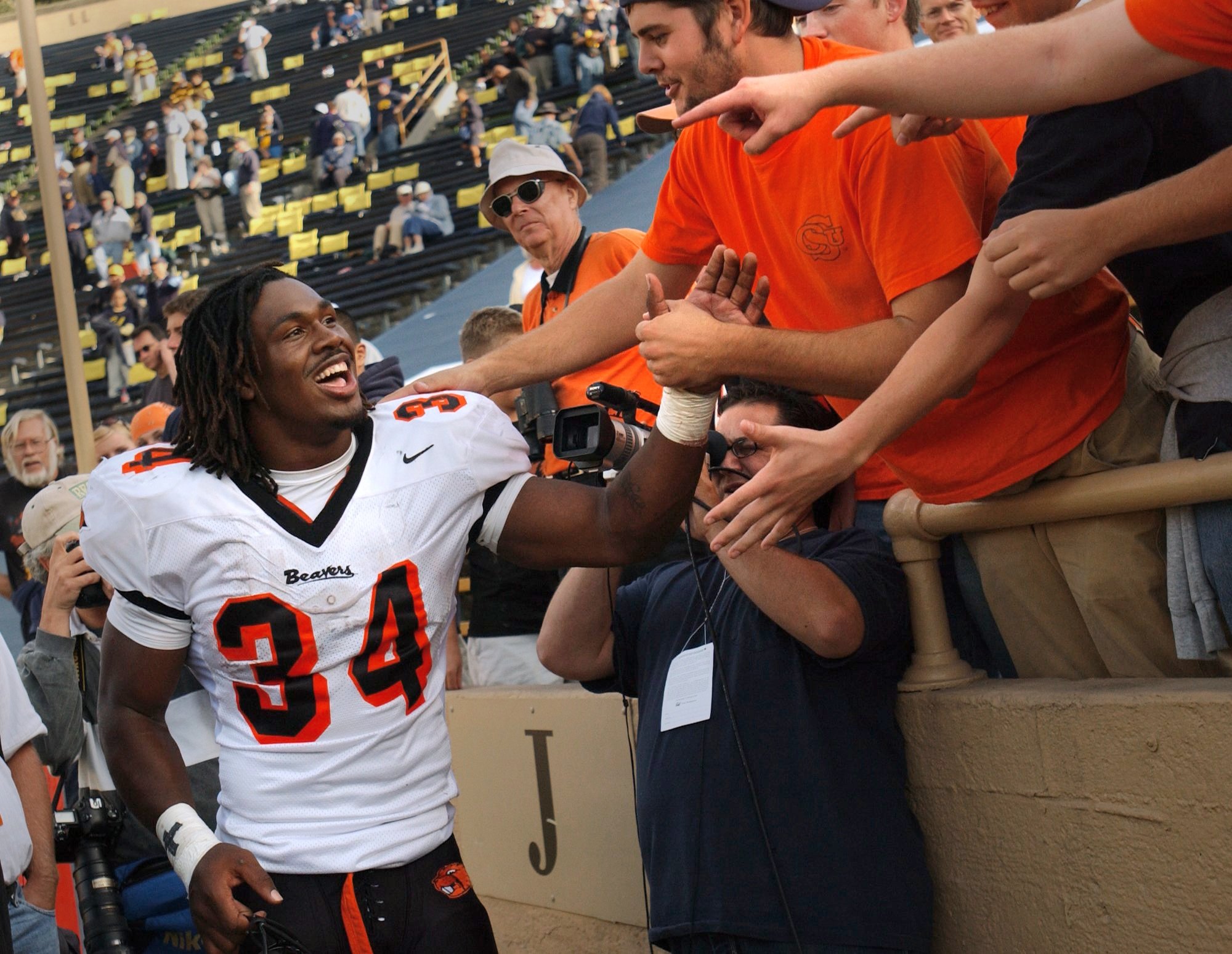 I left OSU after my junior year, but I promised my parents I’d finish my degree.

That’s why I changed my course of study from Architecture to Human Development and Family Science. I’ll always love architecture, and I’m still able to be involved with it through some of the investments I’ve made in different forms of real estate. They still allow me a chance to express my creativity where buildings are concerned. But what I really want to get into is mentoring young people in and around the communities that I live in.

Being a father of two sons (and just having a daughter in the last couple weeks), I’m reminded how young kids and their minds are so inquisitive. They have such a great outlook on life. Whatever they dream and imagine, they believe they can they can do it. From simply learning how to tie a shoe to wanting to be a super hero, their minds are so bright and filled with fertile soil, you could plant anything in there and it could grow.

But young minority men who lack male figures in their lives often wind up in trouble in different ways by the time they’re in high school. A lot of people write those kids off because statistically, boys who’ve lost their way at that point struggle to find it again. Those kids are in need. They’re at a critical point where they could either discover what they could accomplish, or feel like life is too hard, and give up.

I’m someone who was able to live out a dream. I can talk to young kids and encourage them—not only to have a dream, but to have multiple plans in case that dream isn’t fulfilled. I can teach them not to give up on life. I want to be able to go out in that arena and talk to those kids, motivate them to stay on the straight and narrow, encourage them to go to school, go to university, whatever it is that they may choose. If you can get these young people encouraged and see that you really care about them, I think there’s still time before they become young adults that you can ]get them on the right path. With the right motivation and the right push behind them, with the right support system, they can accomplish anything.

So mentoring is one of the things I want to do, and I think it’s something I’ll do until I die.

Over this last year and a half, I’ve started investing in a number of different areas, from single-family homes and commercial building to franchises and restaurants. It’s been a process of surrounding myself with great people, and just learning as much as I can, asking questions about everything like I’m in a classroom setting. I’m constantly picking up knowledge so that I can make the next potential investment my best one. 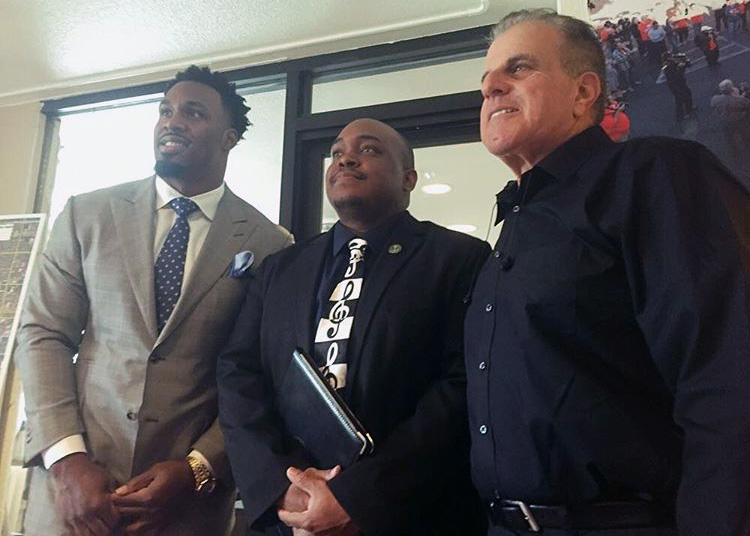 My father and grandfather served in the military, which makes me especially proud to be part of Veterans Village.

I’m really proud of one of the newest projects I’ve become involved in, a non-profit that works with American military veterans called Veterans Village.

I’m the son of a Marine and had a grandfather serve in the military as well, so the military is near and dear to me. Once our brave men and women come back home from serving, I don’t think they should ever be having to spend the night on the street.

Veterans Village One is an apartment complex that helps house up veterans who need housing, furniture, linens—all the necessities of life—so they can get back acclimated into the civilian world. It’s been around for about eight years, and few years ago, I went and visited the site. I’d heard a lot of great things about it, and told the people who ran the project that if there was ever a need or way I could help, I would.

As it turned out, Veterans Village Two—a new proposed 204-unit apartment building— was in need of funding at the 11th hour. It was the perfect first opportunity to get back involved with my hometown community in a way that had a lot of personal meaning, too. As a resident of Las Vegas, I want to do what I can to make it a better place to live for everyone. Veterans Village is a great project. It’s the only entity and nonprofit in the state that provides this kind of help to veterans, and it also provides crisis help 24 hours a day. If a veteran needs to see a doctor or get treatment at a Veterans Affair facility, we can make that happen, too.

MY FUTURE IN FOOTBALL

When it comes to my career in football, I’m at peace with where things are. To be able to do any job for 12 years is a blessing. I was always committed to my team, and gave everything I had, on and off the field. Life goes on.

At the same time, last year taught me something about myself. Playing football is about more than being physically ready to play the game. You have to have your heart in it. You have to be mentally ready to go as well. When the New England Patriots called in December of last year, I’d been off for a long time. But during the time I was with them, I proved to myself that I still had the drive and the ability to play the game at a high level. I was ready in every way.

This year is no different. Physically, I’m in great shape. I still love the game, and I know what I’m capable of. If the right team calls—well, for now, I’ll leave it at that.