HOPING TO CONTEND FOR A TITLE

0
GAMES PLAYED (2013-2014)
0
RUSHING YARDS
0
RUSHING TOUCHDOWNS
At the end of the 2012 NFL season, Steven Jackson and the St. Louis Rams decided to part ways. The Rams needed to rebuild the roster, essentially starting from scratch, while Steven—now entering the later stage of his career—wanted to contend for a title. Despite how difficult it was to leave St. Louis, No. 39 and the franchise that had drafted him agreed it was for the best. The Rams, at Steven’s request, released him from the final year of his contract, making him a free agent on the open market for the first time in his career.

At the end of the process, Steven decided to join a team that had been one win away from the Super Bowl the previous season: the Atlanta Falcons. For Falcons general manager Thomas Dimitroff, the signing was something to be very excited about. He told the Associated Press:

”It continues to bolster our offensive firepower. It gives us not only strength, power in running ability but also the versatility to catch out of the backfield, which is a very important part of this offense.” 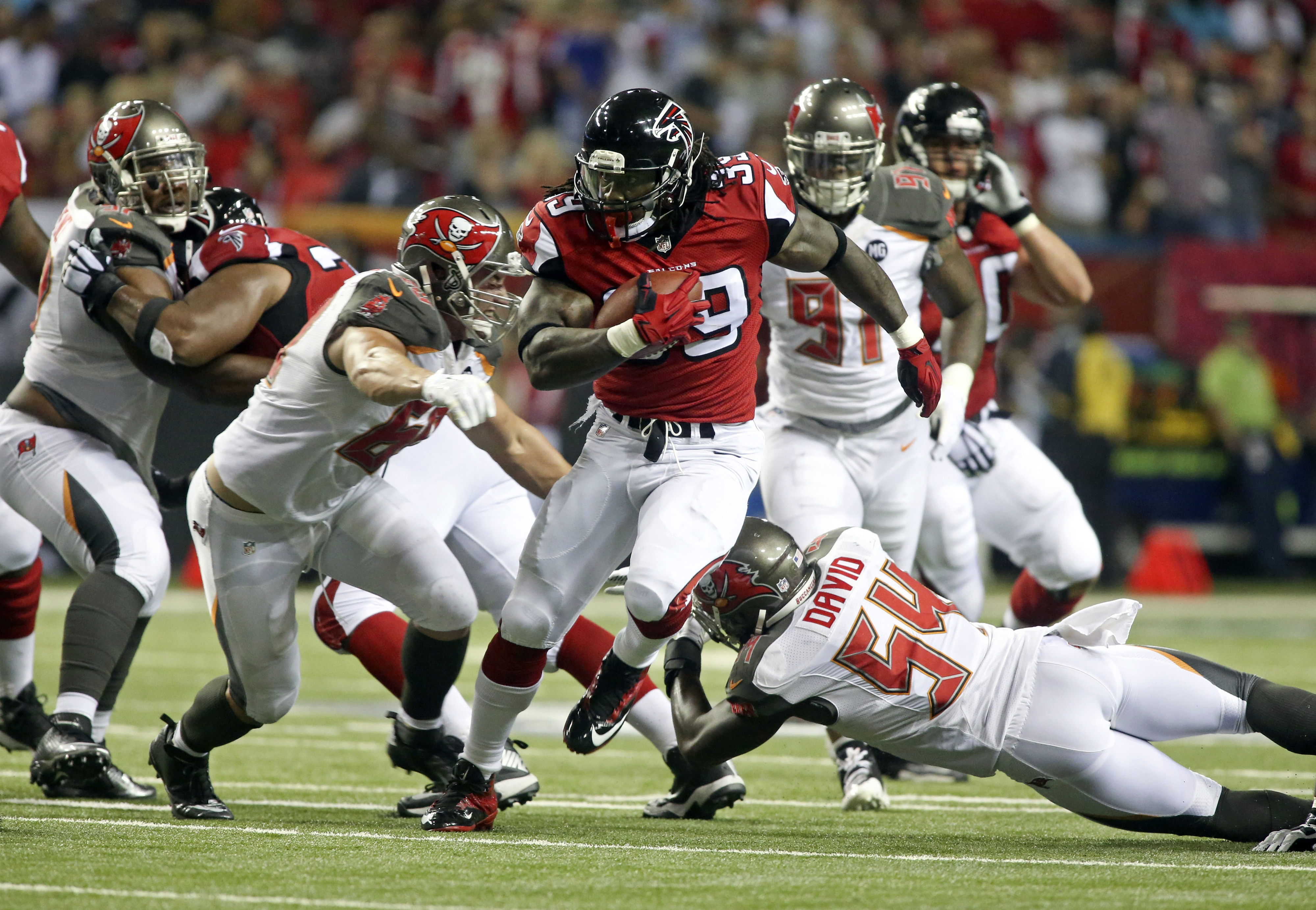 Steven said that he had carried the utmost respect for the Falcons organization, and the way they had built a team to contend for a championship.

“I could go on and on about what you guys have done over the last five seasons,” SJ said. “I’ve admired from afar, and to be at this point in my career where winning is most important, I believe this will be a great chance for me to finish out my career with an opportunity to do some special things, to put an exclamation point to what I have accomplished so far in St. Louis.”

NO LUCK IN ATLANTA

Reality, however, proved far different for No. 39 playing for the Falcons. He would play only two seasons for the franchise, and both were fraught with difficulties that he never anticipated before signing there.

Several key injuries, including one to No. 39, derailed Atlanta during Steven’s inaugural season, and the Falcons finished 4-12. As reported in the Atlanta Journal-Constitution:

Teams don’t go 4-12 because one player fails. Teams go 4-12 when almost everybody fails. It’s natural to wonder what an NFL running back has left after 10 seasons and at the age of 31, but it’s not fair to judge Jackson on last season, when he rushed for a career-low 543 yards and 3.5 per carry (his previous career average: 4.2). He was injured in Week 2, ironically against St. Louis, and ran behind one of the NFL’s worst offensive lines. Injuries to wide receivers Julio Jones and Roddy White further limited the offense.

When Steven returned for his second season as a Falcon, he was optimistic. Players were healthy again, and the team seemed hungry to show that the previous year had been a fluke. But after winning two of its first three games, Atlanta began to freefall once again, losing the next six contests. They finished the year 6-10. Head coach Mike Smith was fired, and when Dan Quinn was hired from Seattle to replace him, the team informed SJ39 that the new regime would be moving on without him.

Still, while his tenure in Atlanta fell well short of his expectations, Steven still valued the time he spent with the franchise. As he wrote in his blog:

Now that the Atlanta Falcons and I have parted ways, I want to say thank you to the organization, and the entire city of Atlanta.

In terms of what we hoped to accomplish as a team on the field, my time as a Falcon was a disappointment, but I will always be grateful for how the city and franchise treated me while I was there. Mr. Blank is one of the classiest owners I’ve been lucky enough to meet, and I feel fortunate to have played for him. I was also fortunate enough to make some tremendous new friends while I was there, and I’ll continue to be a big brother to everyone I shared the backfield with. I wish the Falcons nothing but the best moving ahead.