Steven Jackson entered Sunday’s game in Green Bay facing one of his biggest challenges of the season, to find holes in the third-ranked rush defense of the Green Bay Packers. 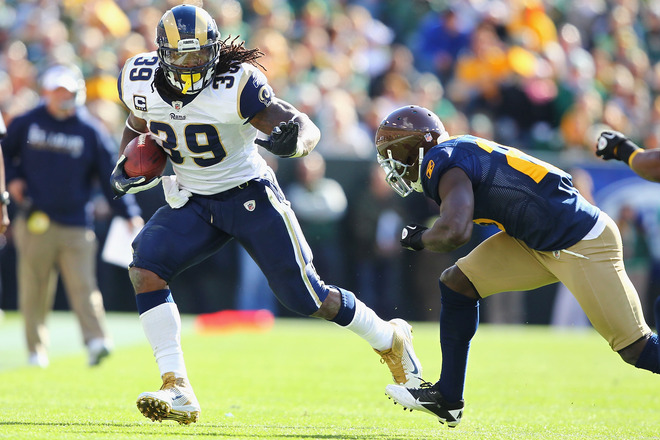 Steven picked his spots well and became just the second back this season to rush for over 90 yards against the Green Bay defense. No. 39 finished with 18 carries for 98 yards on the ground, a 5.3 yards per carry average. He added four catches for 29 yards in his first 100+ all purpose yard day of the season. But the Rams couldn’t find the end zone against the Super Bowl champs and fell 24-3 at Lambeau Field.

Behind SJ39’s solid day and 321 yards passing from Sam Bradford the Rams moved the ball effectively all day against the undefeated Packers.

“It shows you the capabilities of this offense and this team. I thought Josh came in with a good game plan,” S-Jax said. “They were ranked third against the run coming into the game and I think we moved the ball substantially —that’s because of the play of the offensive line— and then we were able to move the ball through the air.”

But when it came time to score, they couldn’t finish drives, which Steven said was most frustrating on a day the team felt they played well.

The chances to cash in came early and often for St. Louis. On the game’s opening drive, SJ39 carried for 22 yards on his first three carries. With the help of long completions from Bradford to Lance Kendricks and Greg Salas, the Rams sat 2nd and 6 at the Green Bay 23, just outside the red zone. But a false start pushed them back and they couldn’t recover. Josh Brown missed a field goal, which left the game scoreless.

Green Bay took a 10-0 lead with scores on two of their next three drives. But following the Packers’ touchdown to make it 10-0, the Rams pushed across midfield again and appeared ready to cut into the lead. 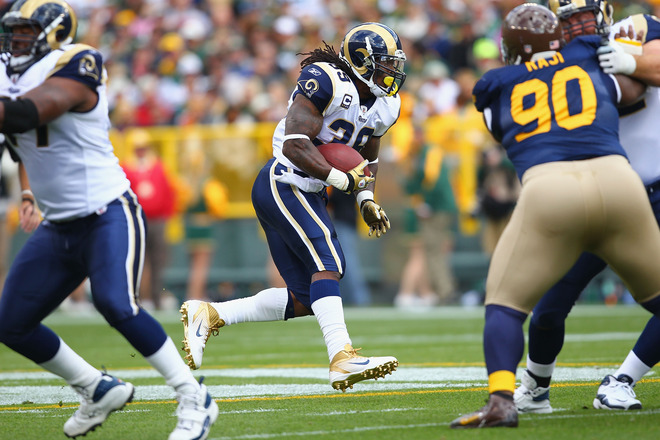 SJ39 ran for nine yards to open the drive, then pushed for three yards and a first down on the next play. Bradford then connected on back-to-back passes to Danario Alexander. The second one put the Rams at the Green Bay 42. But Bradford was sacked on 2nd & 10 and two plays later the Rams were forced to punt. Green Bay scored a 93-yard touchdown on the next play from scrimmage to take a 17-0 lead.

The Packers added a third touchdown to make it 24-0, but Steven wouldn’t allow his teammates to quit. The Rams answered with a solid two-minute drill, pushing into Green Bay territory with under a minute to go. With seven ticks left in the half, S-Jax pulled the Rams into better field goal range with a one-handed catch, gaining 11 yards to the 18.

Josh Brown followed Steven’s big grab with a field goal to make it 24-3 at the break. S-Jax finished the first half with nine carries for 48 yards.

He duplicated those numbers exactly in the second half, and pushed St. Louis to get all five of their second half drives into the red zone, but the Rams couldn’t add more points. Two of those five drives got into the red zone, but with the team pressed for points, Bradford was forced into more passes. He was picked in the end zone in the third quarter and turned the ball over on downs at the Green Bay 15 in the fourth.

“For whatever reason, we get into the red zone, we keep shooting ourselves in the foot,” No. 39 said. “We don’t accept losing and we don’t take any moral victories. But there’s stuff on footage as we get ready for the Dallas Cowboys that we can hang our hat on and continue to build off.”

One of those things that impressed Steven was the play of the Rams’ young receiving corps. Rookie Greg Salas finished with eight catches for 77 yards and rookie tight end Lance Kendricks had four grabs for 71 yards.

“Our young receivers responded to the challenge that was presented to them,” running back Steven Jackson said. “They have some very impressive DBs (Green Bay) that they went against, and they showed that they have the ability to get open and catch the ball.”

The Rams take on the Cowboys next as they look for their first win of the season next Sunday on the road.

Dallas ranks first in the league against the run, but Steven says he is ready for the challenge and he came out of Sunday’s loss feeling healthy.

“I came out ok. I feel like I’m 100 percent,” he said. “It’s been quite some time— since Week 1— that I’ve been able to say that. As we continue to press through the next 11 games, I think you can expect a heavy dose of myself.”

Kickoff this Sunday from Cowboys Stadium in Arlington, Texas is scheduled for 3:15 CDT and the game can be seen on FOX.