Steven Jackson is active and will play for the Rams this afternoon against the Baltimore Ravens.

As first reported by FOX’s Jay Glazer, SJ39 is active and will “give it a go” as St. Louis looks to avoid an 0-3 start this afternoon at the dome against Baltimore.

Glazer tweeted that S-Jax convinced Rams coach Steve Spagnuolo that he was healthy enough to go on Sunday:

Steven missed last week’s game against the New York Giants with a strained right quad, but practiced with the Rams on a limited basis this week and told the Belleville News-Democrat that he was feeling better as the week progressed:

“I was able to get out there today, practice a little bit, get a few reps in,” Jackson said Thursday. “I’m starting to familiarize myself with the game plan and knowing what Baltimore does so mentally, I’m right on key with the team.”

S-Jax and the Rams are very familiar with the intricacies of a quad injury and have erred on the side of caution rather than risk further damage to the muscle or a reinjury.

“It would be a lot easier not only for myself, but for the whole team to know if I was playing. But, with the way the quad is reacting right now, it’ll probably be another game-time decision,” SJ39 said this week after taking reps with the first team in practice…A quad injury is very delicate because you not only have to test it to see where it is, but if you do a little too much, you can reinjure it and take yourself right back to Square 1.” 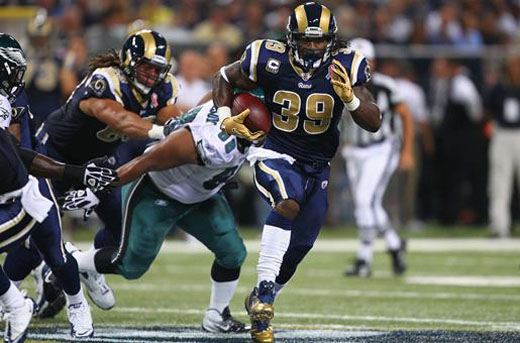 Steven ran for a 47-yard touchdown on the first play of the 2011 season for the Rams against the Eagles.

“It’s an injury that we thought was going to keep me out for a lot longer than it is actually doing right now,” Steven said. “That’s the positive out of the situation, me being at this point of possibly playing.”

No. 39 hoped to play last week, in the Rams’ first Monday night game in five years, but when he went out on the field at MetLife Stadium to test the injury, he couldn’t “open it up” enough to deem himself healthy.

“It came down really close,” Jackson said of the decision to sit out against the Giants. “We got in a pretty good workout Monday night. I passed all of my tests, except the very last one, a 40-yard sprint…It wasn’t for time or anything. I just could not sustain a long run. It was like when the injury occurred. The muscle just wasn’t ready.”

It is this week and SJ39 will be in uniform as the Rams host the Ravens at Edward Jones Dome. Ravens All-Pro linebacker Ray Lewis knows what he’ll be in for with Steven on the other side of the line of scrimmage this afternoon.

“He’s a real animal,” Lewis told reporters of SJ39 this week. “He plays the game almost like a linebacker at the running back position.”

Catch Steven and the Rams against Lewis and the Ravens at 3:05 CDT on CBS.